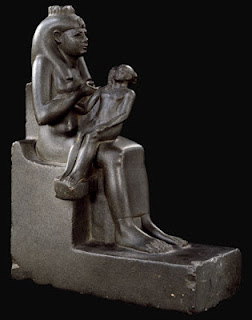 ISIS -The Mother of the Mysteries


Isis is the Mother of the Mysteries. Isis is the Virgin of the World. Isis is Mother Nature herself. Isis is one of the most important symbolic characters in the Mystery Tradition. It is from the womb of Isis that initiates are born. All adepts are daughters and sons of Isis. Which makes each initiate Horus, the ‘Widow’s Son’. Even modern Masonic Lodges refer to members as the Widow’s Son. Ever heard that phrase before? Well, if you hear it again now you know they are talking about Isis. The murder of Osiris is said to be the destruction of Wisdom. In some traditions it is said that the job of Horus is to avenge the destruction of wisdom. Isis, the Widow, is the Mystery School itself, which through her efforts continually produces the redeemers of Wisdom.

Isis is usually seen carrying a simple ankh. The Ankh is the sybmol of Life Eternal. As Isis gave life to Osiris and then gave birth to Horus she is referred to at times as the giver of Life. The life Isis gives is a rebirth into the eternal life of the Mysteries.

Many temples and churches, which were built by Masons, were built on sites where the Black Madonnas were worshipped. Some are literally built on top of the existing site. Just what are the Black Madonnas? In my own opinion and other more scholarly types, the Black Madonnas represent Isis. There was said to be a well at these sites. With the well going down into the ground and spires of the new church reaching to the sky, we have the connection of the Above and Below. As the Masons are the Widow’s sons it makes sense to me that this was down on purpose to bring about balance and help restore Wisdom.