What do we mean when use the phrase Western Mystery Traditions?  In general this includes everything not of Eastern origins.   Many equate the Western Mysteries with Jewish Mysticism and even Esoteric Christian beliefs and practices.  While that is or can be a part of the Western Mysteries, it is not all there is to be found.  The Western Mysteries were heavily influenced by the rites and philosophy of many different Pagan sources.  Some of which include the likes of Socrates, Plato, and Pythagoras to name but a few.  Also included are the rites of Osiris and Dionysus and the Eleusinian Mysteries.  Another whole topic that could be included under the Western Mystery umbrella would be the Holy Grail and the Grail Tradition itself.

High Magic is as much art as science.  The roots of High Magic are ancient, but the techniques have continually evolved and adapted through all ages.  High Magic is also known as Hermetic Magic as it is derived from the hermetic arts and sciences.  High Magic uses and relies upon a complex system of correspondences derived from numerous sources including but not limited to: Alchemy; Astrology; Angelic whether Enochian or not; the Elements-Earth, Air, Fire, Water, and Spirit/Ethers; Gematria; the Tarot; and Qabalah-spelled with a Q to distinguish it from Jewish Kabbalah and Christian Cabbalah.

The Mother of the Mysteries is no less than ISIS Herself.  Isis is the Virgin of the World.  Isis is one of the most important symbolic characters in the Mystery Tradition.  It is from the womb of Isis that initiates are born.  All adepts are daughters and sons of Isis.  Which makes each initiate Horus, the ‘Widow’s Son’.  Even modern Masonic Lodges refer to members as the Widow’s Son.  Ever heard that phrase before?  Well, if you hear it again now you know they are talking about Isis.  The murder of Osiris is said to be the destruction of Wisdom.  In some traditions it is said that the job of Horus is to avenge the destruction of wisdom.  Isis-the Widow- is the Mystery School itself and through her efforts the redeemers of Wisdom are continually produced.

Hermetic Philosphy derives its name from the writings attributed to Hermes Trismegistus.   This name is really a title which means the Thrice Great Hermes.  Hermes is the Greek god name associated with a much older Egyptian God Thoth/Tehuti.  Hermetic teachings heavily influenced the Western Mystery Traditions and through them the Renaissance and the Reformation.  That tells you where the name came from, but still doesn’t tell you anything about Hermetic philosophy.
The Hermetic philosophies found in the writings of Hermes are collected in numerous volumes called collectively the Corpus Hermeticum-17 volumes of which survived. Another much shorter text is the famous Emerald Tablet of Hermes.

The Emerald Tablet of Hermes

Thou shalt separate the earth from the fire, the subtle from the gross, suavely, and with great ingenuity. It ascends from earth to heaven and descends again to earth, and receives the power of the superiors and of the inferiors. So thou hast the glory of the whole world; therefore let all obscurity flee before thee. This is the strong force of all forces, overcoming every subtle and penetrating every solid thing. So the world was created. Hence were all wonderful adaptations, of which this is the manner. Therefore am I called Hermes Trismegistus, having the three parts of the philosophy of the whole world. What I have to tell is completed, concerning the Operation of the Sun.

The Kybalion-is more modern book containing the Hermetic Philosophy, though it was published over 100 years ago now.

"The Principles of Truth are Seven; he who knows these, understandingly, possesses the Magic Key before whose touch all the Doors of the Temple fly open."

The Seven Hermetic Principles, upon which the entire Hermetic Philosophy is based, are as follows:

I. THE PRINCIPLE OF MENTALISM.
“THE ALL IS MIND; The Universe is Mental.”

lV. THE PRINCIPLE OF POLARITY.
“Everything is Dual; everything has poles; everything has its pair of opposites; like and unlike are the same; opposites are identical in nature, but different in degree; extremes meet; all truths are but half-truths; all paradoxes may be reconciled.”

VI. THE PRINCIPLE OF CAUSE AND EFFECT.
“Every Cause has its Effect; every Effect has its Cause; everything happens according to Law; Chance is but a name for Law not recognized; there are many planes of causation, but nothing escapes the Law.”

VII. THE PRINCIPLE OF GENDER.
“Gender is in everything; everything has its Masculine and Feminine Principles; Gender manifests on all planes.”

The Tree of Life
One of the primary symbols seen throughout the study of the Western Mystery Tradition is Tree of Life.  The Tree of Life is derived from Jewish Mysticism and perhaps more properly the European Pagan influences to which the early practitioners of Occult Hermetic Qabalah were exposed.   Within the Tree of Life we have three Pillars and 10 Sephiroth and 22 Paths connecting them. Hmm, just happens to be 22 letters in the Hebrew alphabet.  There are also 22 Keys or Trumps in the Major Arcana of the Tarot.  Each Tarot Key is related to a letter of the Hebrew Alphabet and is assigned a Path along the Tree of Life. 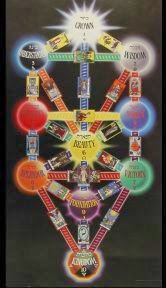 A more familiar view of The Tree of Life may be the image below. 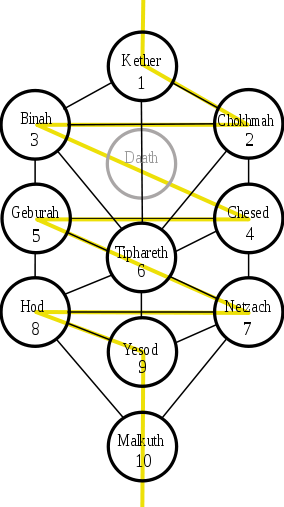 The Pattern on the Trestleboard as listed below walks us down the Tree of Life from top to bottom.  You might notice there are eleven statements listed but only ten numbered Sephiroth.  The other one is for Daath which is not always listed or counted among the Sephiroth.  Daath does exist though and could be the subject of many a discussion.   I’ll let everyone decide which of the eleven listed statements is actually for Daath.

The Pattern on the Trestleboard

This Is Truth About The Self
One lesson of sorts that we find when studying the Western Mysteries asks us to take our own path and or beliefs and see how it fits upon the Tree of Life. Where does your path fit upon this the Tree of Life?

To My Temple I Am Faithful

I awoke the other morning with the phrase 'To my Temple I am faithful' in my head.  I heard it in a dream like state just before I woke up, one minute before the alarm.  I heard it not in English-at least not only in English.  It was in many languages all at the same time.  Including Latin, In templo meo me fidelem.  I rather like that I heard it in many languages as well. I understood it in all of them all at once, which seemed to add a greater perspective.

'To my Temple, I am Faithful.'  I have been Pondering that phrase since hearing it.  What Temple? The inner Temple. The Temple that is inside us one and ALL. That temple not built with hands.

'To my Temple, I am Faithful.'  This simple phrase speaks volumes, to me at least.  It is a simple phrase with a much deeper meaning.

'To MY Temple, I Am Faithful.'  It is my own Temple as it is lies within me.  From it I reach the Most High. My Temple connects me to ALL.  It does so because it is within everyone else as well. I would venture to say it is in Every Thing else as well.

Another way to state this might be, 'To my Heart, I am True.'  Or one might pledge to be True to the Core.  All these phrases hit upon the same truth, which is, there is a Sacred space within us all.  It is a Sacred Temple which connects our Mind, Body, and Spirit.  It is a Temple through which we are connected to the greater whole.

'To my Temple, I am Faithful.' I love it. I Love my Temple and it is filled with Love.

'To my Temple, I am faithful.' I Will be Pondering that phrase for some time to come.

'To my Temple, I am Faithful.' What does that mean to you?

Buddha said, ‘All that we are is the result of what we have thought.’  All things begin with thought.  Thoughts can manifest themselves into reality; this applies to all thought forms whether positive or negative.  With that in mind, we should be careful what we spend our time thinking about.  When thinking about something we are devoting energy to it.  To perhaps oversimplify things if we want to help we should think positive thoughts.  If we spend our time and energy worrying about what might happen, we are only helping it to become a reality.  We may not be able to control much in this world, but we can control our own thoughts.  Control of our thoughts leads to control of ourselves.

In gaining control of ourselves, we begin to gain control of our little piece of the world.  In controlling our own thoughts we take one step closer toward a greater connection with THE ALL.  The Kybalion states, ‘THE ALL is MIND; The Universe is Mental.’  We all live in our own little worlds, but they are all connected back to this larger world.  This world is connected back to this Universe, this dimension and all others.  We are all connected back to the Source.  The Primal Sound or Thought that is the Source-THE ALL.  Once we realize this connection on a Planetary scale the world itself will be changed.

His Holiness the Dalia Lama stated, ‘Inner darkness, which we call ignorance, is the root of suffering.  The more inner light that comes, the more darkness will diminish.  This is the only way to achieve salvation or nirvana.’

We must start with ourselves and find this Inner Peace and Light.  Where do we start?  We start with our own thoughts which lead to our actions.  We can then radiate that light to those around us and to Mother Earth Herself.  We can be like Lighthouses and help illuminate the Divine in all that surrounds us.  Each little candle of Light adds to the total.  With our help the Earth itself can increase it’s own Light Divine.

Aristotle said, ‘We are what we repeatedly do.  Excellence then is not an act but Habit.’  We need to make a habit of our inner work to bring it excellence.  Our work on ourselves as individuals helps the whole of the Universe to reach ever higher levels of consciousness and ever higher levels of vibration.  The effort expended by each individual in contacting their own Higher Self or raising their own vibrational level is not lost.  That effort or expended force clears a Path making it easier for the next person or group to follow.