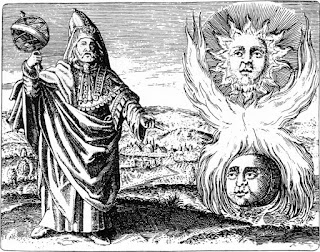 Hermetics
This is for the Pagan Blog Project.  This week I am doing ‘H’ for Hermetics.
Hermetics derives its name from the writings attributed to Hermes Trismegistus.   This name is really a title which means the Thrice Great Hermes.  Hermes is the Greek god name associated with a much older Egyptian God Thoth/Tehuti.  Hermetic teachings heavily influenced the Western Mystery Traditions and through them the Renaissance and the Reformation.  That tells you where the name came from, but still doesn’t tell you anything about Hermetic philosophy.

Ever heard the term Hermetically sealed? To be Hermetically sealed, means an item is not affected by external forces. It is totally isolated. The Hermetic master is also sealed and is beyond outside forces. Though chaos may reign around them, they remain unaffected. The Hermetic master realizes they are the only one that can have any affect on themselves.
The Hermetic philosophies found in the writings of Hermes are collected in numerous volumes called collectively the Corpus Hermeticum-17 volumes of which survived. Another much shorter text is the famous Emerald Tablet Hermes.  The Emerald Tablet is the origin of the phrase, ‘As Above, so Below.’.  The Emerald Tablet also refers to the three parts of the wisdom of the whole Universe.  The Kybalion-is more modern book containing the Hermetic Philosophy, thought it was published over 100 years ago now.
The three parts of the wisdom of the whole Universe include; Alchemy-The Operation of the Sun, Astrology-The Operation of the Moon, and Theurgy-The Operation of the Stars. There are seven Hermetic Principles. Excerpt below from The Kybalion.