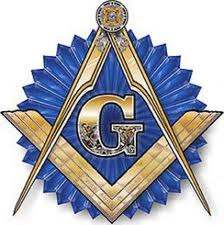 I thought I would do something a bit different from what one might expect to see as part of the Pagan blog Project. I chose to write about the Masonic letter ‘G’ for my first official entry. I must start off by saying that I am NOT a Mason, though I might be one day. I have had many Masons as friends over the years. The Masonic letter ‘G’ stands for more than the typical response of God, though that could be included.

One of the things the symbol ‘G’ stands for is the Grand Architect behind the Universe. The original Masons were builders, stone masons actually. Therefore design and architecture were very important to them. This is also the reason behind the two most recognizable Masonic symbols, the square and the compass. Since they knew the importance of getting a design exactly correct, they saw a Grand Architect behind all of nature.

Coming hand in hand with design and architecture is Geometry, which is also another meaning for which the Masonic letter ‘G’ stands. One must get the angles correct otherwise the structure will not be Square or Plumb. As below, so above; As within, so without… The study of Geometry in the external physical world leads one to Sacred Geometry. Sacred Geometry is the design and plan of the Grand Architect on the spiritual planes which reaches down to us in the physical.

Two ancient and important languages to the Masonic Orders are Hebrew and Greek. The Greek word for geometry is Geometria, meaning literally to measure the world. The Master Mason must take a measure of his own internal world. A Hebrew word having it’s meaning from the same source is Gimatria better known as Gematria. Gematria in short is a system of assigning numerical value to a word or phrase, in the belief that those words or phrases with identical numerical values bear some relation to each other. Gematria is another meaning of the Masonic letter ‘G’.

The Masonic letter ‘G’ also stands for the Hebrew letter Gimel. Gimel numerically is three. Three is the symbol of stability and balance. Stability and Balance make for a stronger building; the same is true internally for each of us. Gimel also represents the camel or the camel’s journey through the desert. Traditionally it is taught that this journey is from the West to the East. Why West to East? The journey to the East is a journey to the Source of Light, physically represented by the Sun.

Hebrew Scholars taught that Gimel represents the rich person running after or seeking out the poor in order to bestow good upon them. Here is an excerpt from “The Hebrew Letters” by Rabbi Ginsburg to provide more of an explanation concerning Gimel. ‘In running, the leg is firmly in contact with the earth; through an act of will, the soul directly affects physical reality. The final reward, the ultimate revelation of God's Essential light, will thus justly be bestowed upon the soul in the very same context as its life's endeavor, the physical world.’ Anyone familiar with the Masonic order knows that helping out those less fortunate is something Masons take to heart. We could delve off in all sorts of directions and get lost in obscurity and minutia concerning Gimel and Gematria but that would be another article entirely.

As mentioned above one answer to the question, 'What does the ‘G’ stand for?', is God. This is true but hopefully as pointed out in this article not strictly in the traditional ‘Christian’ sense of the title. As Greek is a very important language to the Masons ‘G’ also stands for Gaia. Gaia is the primordial Earth Goddess in the ancient Greek religion. With Gaia I bring this post back full circle, for the readers of the Pagan Blog Project. What follows is an Orphic Hymn to Gaia.

Oh Goddess, Source of Gods and Mortals,
All-Fertile, All-Destroying Gaia,
Mother of All, Who brings forth the bounteous fruits and flowers,
All variety, Maiden who anchors the eternal world in our own,
Immortal, Blessed, crowned with every grace,
Deep bosomed Earth, sweet plains and fields fragrant grasses in the nurturing rains,
Around you fly the beauteous stars, eternal and divine,
Come, Blessed Goddess, and hear the prayers of Your children,
And make the increase of the fruits and grains your constant care, with the fertile seasons Your handmaidens,
Draw near, and bless your supplicants.